Our .exe is built using NSIS (Nullsoft Scriptable Install System). If you are an advanced user and would like more documentation, it can be found here: https://nsis.sourceforge.io/Docs/

Most mass deployment software solutions should accept command line options for the given installer.

Below is an example using PDQ Deploy to set the command line options for the GMetrix installer. 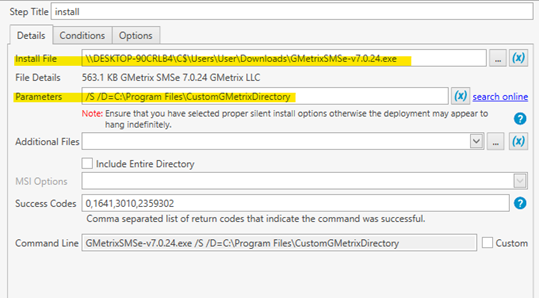 Here is an example of deploying through the windows command line.

Be sure to execute the command in the directory that the installer is located in. In this example, it is in the users downloads folder.

Did you find it helpful? Yes No

Send feedback
Sorry we couldn't be helpful. Help us improve this article with your feedback.